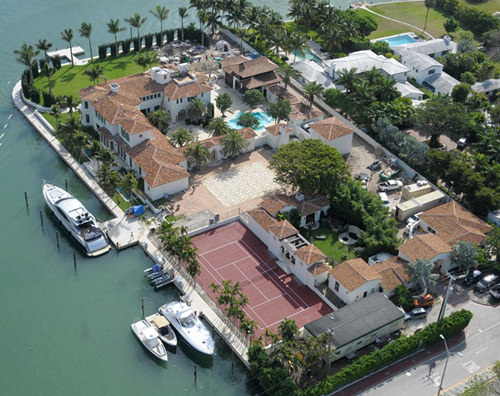 A successful Washington D.C. entrepreneurial bachelor, Bill Dean had the vision to buy the late S.S. Kresge’s, historic home in Miami Beach. Just before going to auction in 2009, Dean grabbed this Mediterranean Revival estate built in 1937 which served as the summer home for the man whose company later became Kmart, for a mere $8 million. Dean then put in an additional $32 million bucks for a “renovation” putting his total outlay to $40 million making it the most expensive “redo” to anyone’s recollection in Miami’s history.

This was not merely an impulse buy on Dean’s part. As C.E.O. of his family’s company, M.C.Dean Inc, a Dulles, Va based engineering company that creates high-tech infrastructure projects providing electronics, telecommunications and energy for governments and corporations, he is accustomed to being analytical and detailed-oriented. Bill is the third generation running the privately held family business that grew from being an electrical contracting company with 55 employees to 3000 with plans to hit over one billion in revenue in 2013.

Bill Dean or “Billy” as his friends call him, likes to work hard and play hard. With 34 offices and projects around the world, he is always jetting off somewhere. He wanted to find a warm winter home to escape to. He searched everywhere and decided on Miami for its proximity to his Washington D.C. base and because he found it to be the ‘Playground of the East Coast’. He also loves the water accessibility in Miami Beach being a boater and fisherman.

One season Bill rented the penthouse at The Setai and that sold him on South Beach as his favorite location. Dean wanted a home on the water where he and his buddies could dock their boats. “I like to walk outside onto my yacht. It amplifies the experience,” says Dean. “At the end of the day, all you have is your experiences in life,” he adds. And Bill loves historic homes (his Georgetown home is Federal period 1800’s). “You can save a lot of money with a bulldozer, but the reality is you can’t build a historic home,” comments Dean.