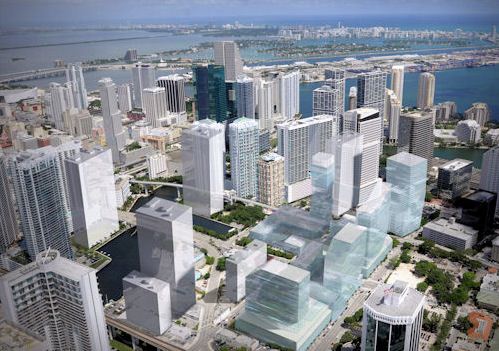 Hong Kong-based developer Swire Properties broke ground on June 2012 on its massive Brickell CitiCentre project in downtown Miami, in what could be the beginning of substantive westward expansion across South Miami Avenue. The nine-acre, $1.05 billion project is planned to include two office buildings, two residential towers, a hotel, a wellness center, service apartments and 520,000 square feet of retail and entertainment space.

In March, Swire announced $140 million in financing for the project from HSBC Bank. The first phase is expected to be completed before 2015.

“The most important thing out of the many important things with this project is that they have moved progress toward the west,” Miami Mayor Tomas Regalado told The Real Deal. “Miami Avenue was just an imaginary line that developers wouldn’t cross to the west, and what this is doing to West Brickell is making it explode as a potential center for real estate and construction.”

In recent years, some developers have begun crossing the “imaginary line.”

Canada-based Ivanhoe Cambridge’s Mary Brickell Village has become a bustling retail center, and Jorge Perez’ Related Group already has 92 percent of units under reservation for its planned Millecento Residences just a few blocks south on South Miami Avenue.
“[Swire] is going to start construction right now, and this will send a message,” Regalado said. “I promise you that all of this area, in the next two years, is going to be changed.”

The project’s first phase is slated for completion in the first quarter of 2014.

But while CitiCentre represents a shift westward, it’s also a significant sign from the East.
Wednesday’s groundbreaking included a traditional Chinese blessing, a ceremonial beginning to what the city hopes could be increased growth in investment from Asia (which began with Genting’s high-profile purchase of the Miami Herald’s headquarters on Biscayne Bay).

“We hope it’s transformational,” Swire Properties CEO Martin Cubbon said. “We’ve done lots of projects like this in Hong Kong and China, and we feel very confident about this city.”

The distance between East Asia and Miami continues to represent something of a roadblock for investment, he said, but Miami is starting to be perceived as a potential investment target in Asia.

“It’s a long way from Asia, but I think [the perception] is changing,” he said. “When people who know us in Asia see what we’ve done, they’ll take note. People from Beijing and Hong Kong will like Miami — so I think you will see the beginnings of more investment. How much there will be will depend on the opportunity.”

By Alexander Britell
The Real Deal