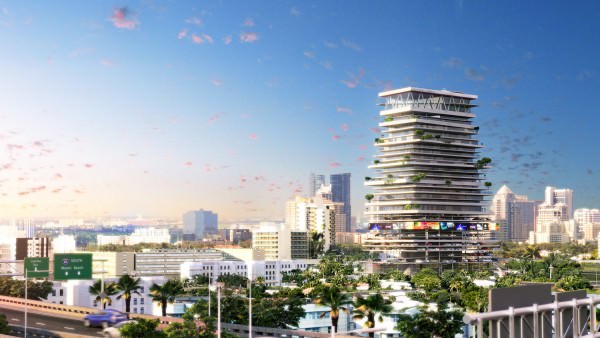 EE Miami Emilio Estefan Tower will be a 520,000 square feet mix use project that will include apartments, office space, retail and restaurant.
In addition to a Bongos. 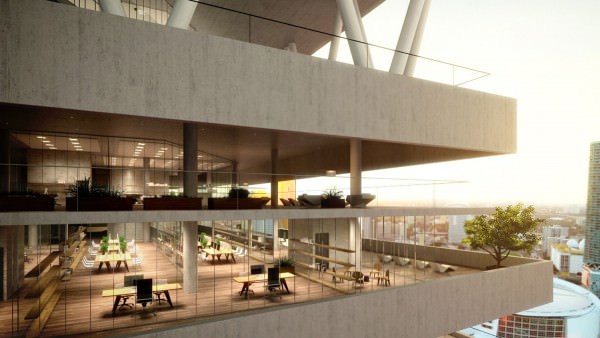 Emilio Estefan, one of the most important music producers of our time, invited FR-EE to design a new milestone in the very heart of the Arts & Entertainment District of Miami. After analyzing the context of the site, FR-EE proposed a creative design for the typology of the tower, in order to develop an iconic project in context with the new language of the city.

The design intends to be a metaphor of the city’s diversity. The building embodies it in the form of retail, services, amenities, offices and apartments, with the aim of celebrating Miami and stress the hallmarks: its diversity and its music. E. E. Miami includes everything necessary for daily life: shopping, restaurants, cafés, apartments, offices, parking lot and amenities. The changes in color (from light green fading into magenta as it ascends) and the height variations of the parapets (which can be used for advertising at the parking levels) give a dramatic dynamism to the façade.

Emilio Estefan has shaped, developed and directed the careers of many superstars in the music industry. He has produced various events for both general market and Hispanic market television. These events include: The Latin Grammy’s, The Hispanic Heritage Awards, Nuestra Navidad, and high profile productions on HBO and Showtime.