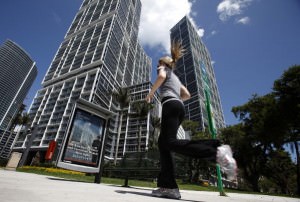 It’s not that Miami isn’t welcoming to Americans, or that developers prefer Brazilians. They don’t. But in this global city today, the big real estate buyers are all from abroad. And one of the reasons, especially when it comes to new developments, is the sales model.

“Latin Americans and Europeans are used to paying in cash for real estate. American’s are not. What we’re doing with our Brickell House property in Miami is telling people that they can pay us quarterly while the project is being built so that by the time it is done in two years, you have paid for almost 70% of your home,” says Harvey Hernandez, chairman of the Newgard Development Group, a luxury property developer in Miami.

“This is the best way to buy it. Or you can wait for the project to be complete, like Americans do, and pay about 40% more,” he says.

They pay-as-they-build sales model is popular in Latin America. It’s not unusual to see new residential high rises going up in São Paulo with floors being sold before the roof of the building is even in place. For Brazilians, in particular, Miami is their second or third home. Real estate prices in upscale beachfront property in Rio de Janeiro, for example, is more expensive than it is in Miami, a city in a developed country with all the bells and whistles.

Hernandez says that within just 90 days of trying to sell Brickell House’s 374 units, 190 of them have already gone, 90% of them to Brazilians, Venezuelans, Mexicans, Russians, Chinese and Europeans. One bedroom units cost around $300,000, chump change in Europe thanks to a favorable exchange rate.

The sales success at Brickell House is the result of the world’s rekindled love affair for South Beach and new, ultra-mod American luxury in a glam global city. South Florida is in the early stages of a new development wave to cater to the foreigners, with 22 newly-announced projects accounting for more than 4,000 units in a section of the city that’s basically sold out.

Today, fewer than 1,500 condos in the Brickell Financial District are on the market, according to a June 2011 market study by the Miami Downtown Development Authority. With the continuation of this sales velocity, the remaining unsold inventory could be sold-out in the next year leaving an inventory gap in Miami.

“Miami’s existing condo inventory has been absorbed at a faster rate than anyone could have predicted,” says Hernandez. “We are still seeing strong interest from international buyers who appreciate Miami’s status as a global business and entertainment hub and see value in the city’s Brickell Financial District. We see our sales momentum continuing through our groundbreaking this summer and we expect to be sold out by the end of 2012.”

For Miami Real Estate, Better To Be A Foreigner