With gambling approval denied in Tallahassee, Genting Group scales back its design to initially use just a fraction of the bayside resort site. 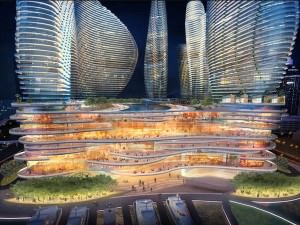 Even without casino gambling, Genting Group said Tuesday it is moving ahead with a dramatically scaled down mixed-use plan for Resorts World Miami.

The five acres where The Miami Herald currently sits would become the site for a five-star luxury hotel, luxury condominiums, waterfront restaurants, some limited retail and an 800-foot long promenade along Biscayne Bay.

It’s still too early to tell exactly what it would look like because the project is being designed by Miami’s Arquitectonica. There are no renderings available, no specifics about the size of any of the elements or any idea what would happen to the rest of the 13.9 acres on the Herald site.

“With more and more people traveling to downtown Miami and a growing number of residents calling the area home, we are going to seize the opportunity to convert this prime piece of bayfront land into the centerpiece of a thriving neighborhood.” Bernardo Fort-Brescia, co-founder and principal of Miami-based Arquitectonica, said in a statement released by Resorts World Miami.

Early indications are that this version of Resorts World Miami will be a far cry from the original $3.8 billion project with 5,200 hotel rooms, the world’s largest casino, more than 50 restaurants and bars and a retail shopping mall. That plan drew the ire of many community leaders for the being out of scale with the neighborhood surrounding the Adrienne Arsht Center for the Performing Arts and having the potential to create a traffic nightmare.

“It sounds more modest and more reasonable; somebody is listening,” said Jack Lowell, a Miami commercial broker who was a Genting advocate in the business community. “I think it is also reflective of the current market and seems to make some sense.”

The first inkling of Genting’s latest plan comes about six weeks after the Florida Legislature shut down efforts to approve destination resorts in South Florida. A proposal can be revived next year.

Miami City Commissioner Marc Sarnoff, whose district includes the site, said he has been told renderings will be available in 30 to 60 days. During meetings with Genting, Sarnoff was told the project would include a pedestal with two or three towers on top. But the design would not include the futuristic look of the original project with irregular shapes designed to resemble a coral reef.

“I’m expecting to see a lot of rectangles with some architectural nuance to it,” Sarnoff said. “You could build the fish with casino gambling, because gambling allows you to do anything. It covers up all your mistakes. I like to see people build efficient buildings. These buildings will work across the board. They’re coming back with a footprint that is more germane for the way things get built in Miami.”

The new vision is also good news to Arsht Center leaders, who had been among the biggest critics of the original Genting plan because of the potential impact it would have on their facility.

“I think the Arsht Center and the neighborhood would benefit from that kind of development,” said Armando Codina, chairman of the Town Square Neighborhood Development Corp, the nonprofit created to protect the interests of the Arsht Center and the surrounding area. “It would be a very welcome addition. I just hope that the addition to the tax base will be used by the CRA to meaningfully improve the rest of the neighborhood.”

This time around Genting seems to be taking a go-slow approach. The company has been quietly discussing its new plans with select city leaders and distributing only a three-paragraph press release with limited specifics.

Last time around, Genting unveiled its ambitious proposal with a slick video and cocktail party for community leaders at the Four Seasons Hotel.

The new proposal would take up only a fraction of Genting’s 30 acres in the Omni neighborhood. Since purchasing the Herald land last May, Genting has invested about $500 million in real estate, including the Omni Center and other parcels. Genting is expected to continue operating the existing hotel at the Omni Center and leasing the remainder of the vacant office space on the site.

Genting Chairman K.T. Lim had always said that if gambling didn’t get approved, development of the Herald site could take up to 20 years.

“They said from Day One they would bring a project to market that meets market demand, and that’s what they’re doing,” said Tadd Schwartz, Genting’s South Florida spokesman. “They want to let the public know they are committed to Miami. This project will be within the scale of what currently exists in downtown Miami’s luxury hotel and condo market.”

The Herald, which has an agreement to remain on the property rent free for two years, is scheduled to move to a Doral site by May 2013.

Genting’s development plans, as they exist now, call for demolishing the Herald building and removing what has for decades been a barrier to public access of the waterfront. The idea is to create a gathering place where people can stroll or dine overlooking Biscayne Bay. Plans call for a waterfront promenade 50 feet wide that spans 800 feet. The design will also maintain 100-foot corridors on either side of the development with landscaped green space to allow a view of Biscayne Bay.

“The new design for Resorts World Miami will bring to life one of Miami’s most underutilized pieces of waterfront land after decades of inactivity,” Fort-Brescia said.

The Genting project also seeks to capitalize on what is quickly becoming a limited supply of luxury condominiums downtown. A recent study by the Downtown Development Authority found 93 percent of the nearly 23,000 condominiums built after 2002 are occupied. Of that, only about a third are occupied full-time by owners, with the majority serving as rental apartments.

“If we’re going to keep up with our growth, we have to get some projects in place,” said Alicia Cervera Lamadrid, managing partner of Cervera Real Estate. “There are not that many sites left. I don’t think there’s anything else being planned directly on the waterfront.”