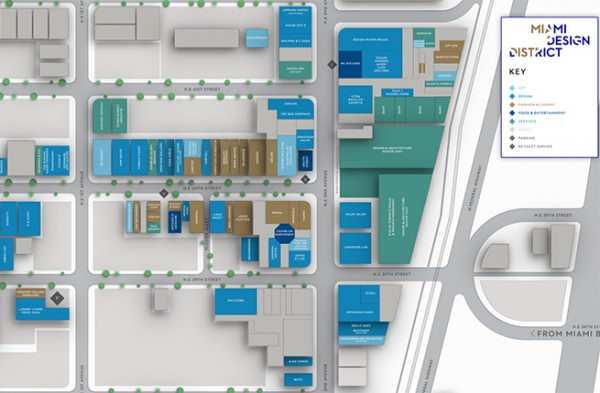 True grit lies beneath the increasingly well-manicured streets of Miami’s Design District. While luxury shoppers might visit the area’s graffiti-covered Louis Vuitton store — and some of them might even move into the condos next door — genuine graffiti is surely being sprayed somewhere nearby. In 2010, the median income in the Design District was $39,112, about $13,000 below the US average. But this area, once barren, save for a few home design stores, art galleries and DASH — the city’s renowned design and architecture high school — is changing, and fast, thanks to public art displays by the likes of Zaha Hadid, locavore restaurants, hip new condominium buildings, and, of course, plenty of places to buy clothes. Expensive clothes.

But like a good piece of art, that slightly unsettling edge — a flash of spontaneous graffiti here, a raw loft space there — will continue to permeate the Design District. That is, if Craig Robins, the developer behind the neighbourhood’s decade-long transformation, has anything to do with it.

Over the past decade, Miami has gone from a second-tier American city — a place where Northerners might spend a weekend to even out their tans — to one of the country’s most exciting cosmopolitan hubs, thanks to an influx of foreign visitors and residents. Cuba’s longstanding influence is undeniable. But high-net-worth types from places like Russia and Brazil are now giving Miami a more moneyed air. And that nuevo wealth, of course, has attracted new restaurants, condos and, of course, luxury retailers.

The 2009 opening of concept boutique The Webster breathed new life into South Beach’s increasingly commercial Collins Avenue, while Alchemist on Lincoln Road, opened in 2010, still feels special next to the Banana Republics and Pottery Barns that line the outdoor mall. But Robins — a legendary developer in a city of legendary developers, who helped revitalize South Beach in the 1990s — saw a bigger opportunity: an alternative to Bal Harbor Shops, an open-air shopping mall, opened in 1965 near Miami Beach, and the city’s preeminent destination for luxury retail, with some of the highest sales per square foot in the world. But Bal Harbor had such a stronghold on the market that it forbade brands who leased space there to have stores within a 25-mile radius.

“While Miami is an enormous market for luxury fashion — one of the top markets in the US — it was incredibly underserved,” Robins says. “Bal Harbor offered success, but because of the exclusivity clause, it didn’t offer a choice.”

Robins’ interest in the Design District emerged about 10 years ago. “I realized early on that, while the neighbourhood was known for its furniture design and furniture companies, furniture doesn’t really attract people,” says Robins. “People redo their houses every 10 years. They go to restaurants often. They go shopping more often.”

In 2005, he launched Design Miami, a furniture and industrial design fair that runs alongside (and in collaboration with) Art Basel. Throughout the aughts, Robins purchased properties in the area. And by 2009 he was ready to propose his intentions to luxury retailers, who are the first to support art projects such as Basel with one-off events, sponsorships and collaborations.

His first stop was Louis Vuitton CEO Michael Burke, who was, at the time, CEO of Fendi. “He’s a very, very savvy real estate person, and he immediately saw the opportunity,” Robins says. “As did the team at L Real Estate. Some of the brands needed more representation.”

L Real Estate, a private equity fund sponsored by Groupe Arnault and LVMH, bought a 50 percent stake in the project in 2010. With L Real Estate involved, getting brands owned by LVMH on board was certainly easier (though plenty of PPR, Richemont and Renzo Rosso-backed brands have signed on as well).

“The biggest challenge was to get the brands to agree to take the chance on a new neighbourhood — to vacate what is one of the most beautiful and successful malls in the country,” Robins admits.

Bal Harbor’s roster of stores remains impressive; it counts Balenciaga, Saint Laurent and Marc Jacobs amongst its current retailers. But the mall’s strict exclusivity codes were suffocating for many brands. And, in contrast, Robins and L Real Estate allow brands who lease space in the Design District to run concessions at the city’s Saks Fifth Avenue — which has reportedly benefited greatly from this opening of the floodgates — or even operate standalone stores in Miami’s Aventura Mall, which conveniently happens to be owned by the family of Robins’ girlfriend, Jacquelyn Soffer. Louis Vuitton, for instance, has opened in both Aventura and the Design District. And the flexibility of these arrangements makes betting on the Design District — which has suffered from lack of foot traffic during off-seasons — a little easier.

Robins was not the only developer to take notice of the Design District. Asi Cymbal acquired land in the neighbourhood around the same time, bringing on architect Enrique Norten, as well as New York-based Robin Zendell, a founding partner at Retail Space Partners, to “curate” the project, using her extensive Rolodex to lure luxury retailers. Zendell, who is best known for bringing luxury brands to Soho, was drawn to both the district’s Soho-in-the-early-days-feel and the city’s overall growth potential as a luxury market. “Before, Miami was a place to unload your summer gear,” she says. “Now even cashmere sells in Miami.”

Four years, a Céline boutique and a Buckminster Fuller dome later, Robins’ $320 million master plan to transform the city’s Design District into the neighbourhood of choice for luxury retailers seems to be working. By the end of 2015, 100 brands will have stores in the Miami Design District, including Louis Vuitton, Hermès, Cartier, Tom Ford, Emilio Pucci, Berluti and Fendi. Importantly, the mixed-use neighbourhood will blend commerce with culture, welcoming new restaurants — 15 to 20 over the next two and a half years — upscale condos, and 12 public art installations.

“It offers a wide variety of different types of experiences,” Robins says. “When you come here there will be a lot of art, anchored by the Rosa de la Cruz collection and my own collection. The restaurants [including The Federal and Blue Collar] are already great, and there already several stores opened.”

So, Robins was able to build it. But are they coming?

Christian Louboutin, one of the first brands to get on board, offers a decent proof of concept. The company launched its first-ever Miami boutique in the district in 2009, spending significantly more money on the store’s concept and design than usual, hiring frequent collaborator Eric Clough of 212box to create an orchid-lined outside wall and a spider web of hosiery that is suspended over the shoe displays. “We really believed in this project,” says Christian Louboutin’s chief operating officer Alexis Mourot. “In Vegas, there is no alternative but to go to the mall or the casino. But in other cities, we’re always looking for a cool place to build our stores — it’s important for the brand.” Today, the Miami Design District store is one of the top five grossing Christian Louboutin boutiques in the country.

Cartier, which opened a temporary store in the neighbourhood in September 2012, with a two-storey flagship planned for 2014, has benefited from being able to run an outpost in Aventura Mall, as well as the Design District. “We’re ahead of expectations,” says Emmanuel Perrin, president and chief executive officer of Cartier North America, who says the Design District store saw a big “pick-up” in January and February, after Art Basel. “When we were approached, the project was still in its infancy, but Craig had a vision, and he was clearly looking at the relationship as a partnership.”

Zendell, for one, has every confidence in the future success of the Miami Design District. “I’m betting on Craig’s past successes, his legal mind, his tenacity, his alliance with Aventura, his vision,” she says. “And L Real Estate’s expertise, money and brand power.”

Disclosure: LVMH is part of a consortium of investors which has a minority stake in The Business of Fashion.