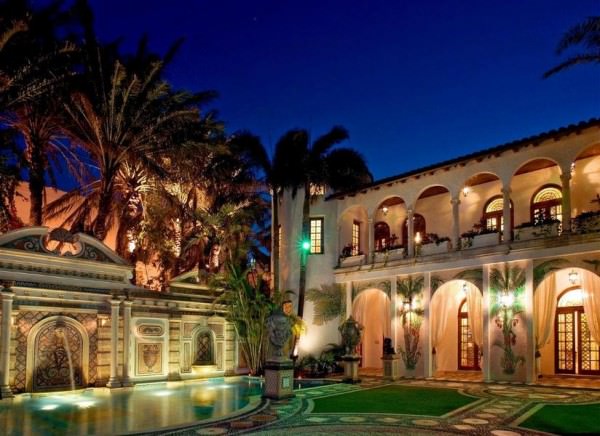 One of America’s landmark homes, the Miami Beach mansion that once belonged to Italian fashion designer Gianni Versace, was sold at an auction on Tuesday for $41.5 million to a business group that includes the owners of the Jordache jeans brand. The 1930s-era Mediterranean-style estate, which has 10 bedrooms, 11 bathrooms and a pool inlaid with 24-karat gold, was auctioned off as part of a bankruptcy proceeding by its current owner, telecom magnate Peter Loftin.

Bidding opened at $25 million and the winning offer was made by the current mortgage holders of the property, VM South Beach, a company affiliated with New York’s Nakash family, which controls Jordache Enterprises. The group beat out several other bidders, including billionaire Donald Trump and a Florida developer who owns the Palm Beach Polo and Country Club.

Potential buyers participated in a poolside auction at the three-story mansion on Miami’s Ocean Drive. The property is now known as Casa Casuarina. Bidders were required to sign a confidentiality agreement and meet financial requirements by making a $3 million deposit and demonstrating an ability to pay at least $40 million.

The 23,000-square-foot mansion, replete with hand-painted frescoes, Italian marble and a gold-and-marble toilet, has been the subject of a long legal battle. In 1997, Versace was gunned down at the mansion’s entrance gate by serial killer Andrew Cunanan. Three years later, Versace’s family sold the property to Loftin, who is now facing bankruptcy and who had been trying to sell the house for more than a year.

The property was initially listed on the market with an asking price of $125 million. The price was later lowered to $75 million. It eventually ended up in bankruptcy proceedings. In recent years, the mansion had been used as a private club and a boutique hotel.

Versace bought the property in 1992 for $2.9 million. He then purchased the hotel next door and spent $33 million on renovations to add another wing. Inside, he decorated with an over-the-top style that included paintings of Grecian, nymph-like characters playing lyres under palm trees.

The snake-haired Medusa head, Versace’s logo, is on display throughout the house, which is being sold fully furnished.

When Versace owned the property, he helped usher in a renaissance of Miami’s South Beach. His presence attracted models, jet-setters and celebrities including Sylvester Stallone and Madonna, who also bought homes in Miami. The former Versace mansion was originally built by Standard Oil heir Alden Freeman. It was modeled after the Alcazar de Colon palace built in the Dominican Republic in 1510 by the son of Christopher Columbus.