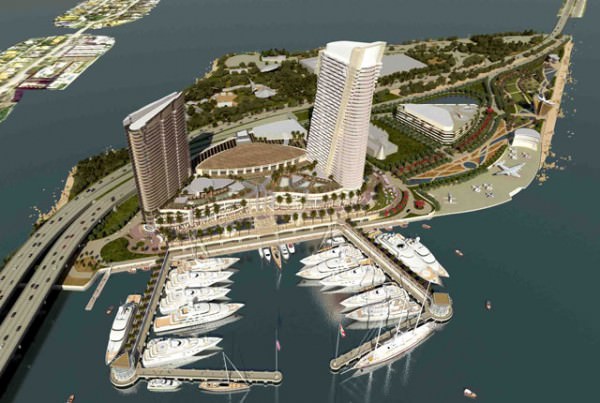 Miami Super Yacht Marina To Be Built In Watson Island

Organizers of the Yacht & Brokerage Show have signed a contract to expand the 26-year-old show into an as-yet-unbuilt mega-yacht marina on Watson Island.

Despite a decade of false starts, the Island Gardens project is slated to confirm financing this spring and begin dredging the marina by June, said Mehmet Bayraktar, the Turkish founder of the development company, Flagstone Property Group.

If it can do that, next year’s show would have a 25-foot deep basin in which to erect floating docks for any number of yachts. The marina’s real docks would be built in time for the 2016 show, both sides said.

“We are very excited about the expansion of the show,” said Ann Vernon, executive director of the Florida Yacht Brokers Association (FYBA), which co-owns the show with Show Management. “This is the largest show we’ve had to date, and we see the expansion as a positive indication of where the show needs to go.”

The show gave a trial run at expanding for larger yachts this year by contracting with the A dock at Miami Beach Marina. Called Superyacht Miami, that exhibit has about seven or eight yachts, including at least one larger than 170 feet.

A new marina would allow for additional luxury and lifestyle exhibits as well as yachts.

Despite the announcement, several more hurdles still need to be cleared before construction begins on Watson Island, not the least of which is securing financing and perhaps finding a co-developer, said Bahar Bayraktar, director of communications for the company and daughter of the owner.

And while the developers and show organizers appeared confident yesterday that would happen, Miami real estate watchers aren’t convinced.

A version of this project was first proposed more than a decade ago. Watson Island is on the west end of Government Cut, bifurcated by the MacArthur Causeway with Jungle Island on the north and the seaplane base and helipad on the south.

Residents balked at projected hotel and residential towers, so the project stalled amid securing permits, approvals and financing.

Then, at about this time last year, the company announced it was finalizing financing and would begin construction by September.

In June, Miami real estate powerhouse The Related Group announced it would participate in the project, giving city officials enough cause to extend the lease until construction could begin. With Related Group, the project grew to almost double its size in terms of retail with more hotel and convention center space.

Two months later, in August, Related Group withdrew, saying it didn’t want to deal with an expected long approval process and opposition from residents, according to news reports.

At the time, Flagstone said it would pay for the marina portion itself and that work would begin by the end of the first quarter.

Yesterday, Bayraktar said dredging would begin in June. Under city timelines, construction on the uplands doesn’t have to begin for another year, Bahar Bayraktar said.

Drawings and renderings of the marina look inviting.

“This is not a marina for parking, Mehmet Bayraktar said after the announcement yesterday. “It will be like pulling up to Worth Avenue or Rodeo Drive. It will be like Monaco and St. Tropez, that was the inspiration.”

In addition to a 100-foot-wide strip of pedestrian area near the water, the upland developments would include alfresco dining, two levels of retail and restaurants,and two hotel/residence towers. It also will have “the smallest international airport in the country,” Bayraktar said, pointing to a small area for seaplanes whose landing strip would be Government Cut. Helicopters, too, could land there, just east of the marina.

The Miami super yacht marina is slated to have about 5,500 linear feet of dockage, including about 450 feet of bulkhead on the outside. Bayraktar said a vessel of about 600 feet could dock stern-to in the center of the basin. Designs include no finger piers to remain flexible with stern-to dockage, but he said it will accommodate up to 75 megayachts, depending on size. 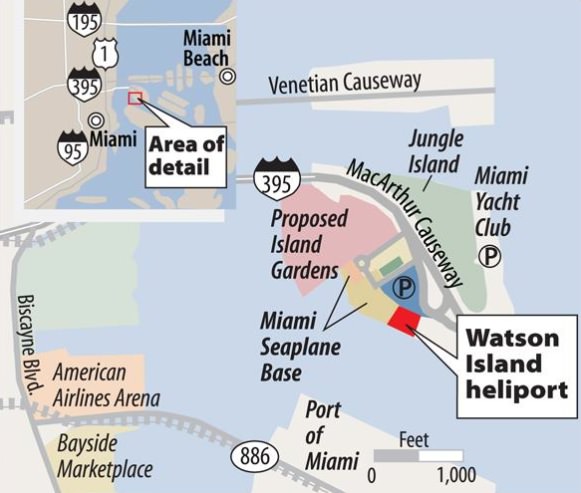