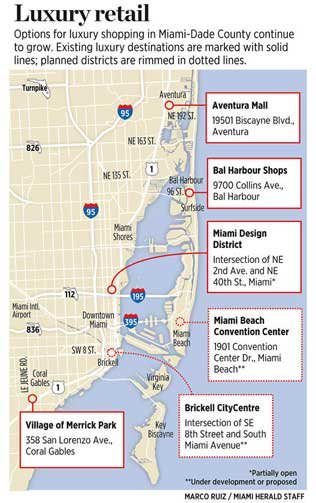 When Brickell CitiCentre opens in 2015, South Florida’s luxury seekers will be dealing with a familiar retail company. The owners of the Bal Harbour Shops are joining forces with Swire Properties on the project.

Bal Harbour Shops has decided the best defense may be a good offense.

After years of fighting the expansion of luxury retail in Miami-Dade, the owners of Bal Harbour Shops have done an about-face and decided to help fuel the growth.

The Whitman family, which owns Bal Harbour Shops, finalized a deal Tuesday to become a partner with Swire Properties in the development of downtown Miami’s Brickell CitiCentre. Plus, the Whitmans are part of one of the groups bidding for rights to redevelop the Miami Beach Convention Center.

The moves are a dramatic sign of the shifts in Miami’s luxury retail market, a segment the Bal Harbour Shops have controlled since 1965. With Miami’s ascent as a fashion market, retailers have insisted that one store is not enough. The change was underscored last year with the arrival of brands like Louis Vuitton and Prada in the Miami Design District, which is poised to become Miami’s version of SoHo.

“Resistance becomes futile at some point,” said Matthew Whitman Lazenby, operating partner and the third generation to run the business his grandfather Stanley Whitman founded. “Our brands convinced us that they believe there is room for more than one store in the market

“If you recognize that you have competition, than why not become the competition rather than playing defense all the time?” Previously, tenants had to abide by strict clauses forbidding them to open within 20 miles or give up part of their revenues from additional outlets to Bal Harbour.

The Whitmans will make a “significant” equity investment in the retail portion of Brickell CitiCentre and serve as co-developer with Swire Properties, which will remain the majority owner of the $1.05 billion urban shopping and mixed-use development scheduled to open in 2015. Both developers will equally share responsibility for all phases of the 520,000-square-feet of retail, from leasing to marketing. Financial terms of the agreement were not disclosed. Swire will still handle the office, hotel and condo components of the project.

“It’s very hard for us to make any claims we know the local market in terms of retail,” said Martin Cubbon, chief executive of the Hong Kong-based Swire Properties, which has developed retail in Asia but only condos, hotels and office buildings in Miami. “They know what works in this retail mix and they have the confidence of the major brands. There is no question it gives us more confidence in the project’s success.”

Steve Owens, president of Swire Properties, likened the joint venture to the Miami Heat’s signing of LeBron James. Bal Harbour also has an international reputation as the top producing mall in the world based on sales per square foot, according to the International Council of Shopping Centers.

“What better way to complement our team than bringing in the No. One shopping center developer,” Owens said.

For the owners of Bal Harbour, the change of course came after several major tenants closed up their Bal Harbour shops and moved to the Miami Design District and some added additional stores at Aventura Mall. Louis Vuitton, Cartier, Dior and Celine are those that have recently left. Next on the list is Hermes, which will close next month.

The exodus came because retailers wanted to be able to open a second store in Miami-Dade to accommodate the growth in demand for luxury goods. Lazenby acknowledges that Bal Harbour’s radius clause has loosened to allow shops like Prada to remain at Bal Harbour and open elsewhere.