As each of the state’s most powerful business and political interests line up to fight over the fate of destination Miami Resort Casino, emotional appeals for jobs will be pitted against emotional concerns about the future of Florida 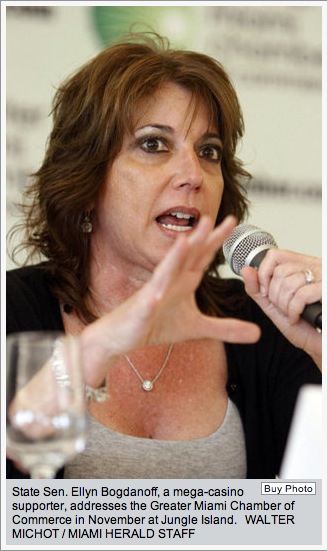 TALLAHASSEE — Despite the promise of thousands of jobs and the millions of dollars spent on lobbying and land buying, the proposal to bring destination resort casinos to Florida faces steep odds when lawmakers take up the landmark proposal during the 60-day legislative session that begins Tuesday.

Senate sponsor Ellyn Bogdanoff last week released a 170-page rewrite of the bill to help take pressure off reluctant lawmakers by including a requirement that any county — including Miami-Dade or Broward — that wants to attract one of three mega resorts must first get voter approval.

To win over supporters of the existing pari-mutuels, the revised bill allows them to operate Las Vegas-style games and receive a lowered tax rate if they compete directly with the new casinos. And across the state, any struggling horse and dog tracks and jai alai frontons would be allowed to ask voters to let them install slot machines.

The bill also attempts to win over gaming opponents. Bogdanoff, a Fort Lauderdale Republican, and the House sponsor, Rep. Erik Fresen, R-Miami, would ban new pari-mutuel permits, regulate or close down “maquinita” establishments that cater to small-bore gamblers and set up a strict new regulatory structure. The state would create a new “Department of Gaming Control” to administer and license the casino resorts and regulate the pari-mutuels and card rooms.

“Our goal is a significant reduction in gaming,’’ Fresen said. “That’s the only shot this bill has.”

There is no guarantee these changes will assuage the critics on Monday when the bill comes up for its first vote in the Senate in a pre-session committee hearing. But the bigger test is in the House, where a conservative Republican majority and a presiding officer whose home territory includes Disney World in Orlando are reluctant to open the door to anything that could harm the state’s family-friendly tourism image.

One thing is certain about the looming legislative debate over gambling: It will be an epic battle in Tallahassee.

The state’s most powerful business and political interests have lined up on both sides — pitting emotional charges of lost quality of life against promises of jobs.

On one side are religious groups, restaurant, tourism and lodging companies, the Florida Chamber of Commerce and Orlando’s Disney Company, which are financing lobbyists, consultants, television ads and polls to kill the bill. On the other side are national and international casino resort companies, including Genting Americas, Las Vegas Sands and Wynn Corporation, Associated Industries of Florida as well as building trade and construction groups that see the multi-billion construction project as a way to stanch the exodus of skilled workers from South Florida.

On the sidelines is the pari-mutuel industry. It is making demands of legislators, particularly Broward and Miami-Dade Democrats they have supported financially for years. The South Florida racinos argue that they paid a 50-percent tax rate under former Gov. Jeb Bush for the privilege of operating slot machines and now say they won’t pay the $100 million investment required to get casino games under Bogdanoff’s bill.

Across the political spectrum, powerful business and political leaders, from Miami auto magnate Norman Braman to former U.S. Senator and Gov. Bob Graham, are urging legislators to vote against the casino bill as bad for the state.

“We have a lot of people in Miami-Dade County who have worked hard to make the community the kind of place it is today and this is not the direction they want to see Miami go,’’ said Sen. Nan Rich, the Senate Democratic leader.

Although insisting “I’ve not made up my mind,’’ Rich said she believes that three resort casinos in South Florida “would destroy the quality of life in our community.”

Bogdanoff counters that the state’s current loophole-ridden approach to gambling has been driven by a pari-mutuel industry that she says profits off “predatory regional gaming.”

“We need to redirect our gaming to bring in international trade shows and conventions,’’ she said.

Then there are the revenue consequences. A mega-casino in South Florida could mean the end to Florida’s annual gambling payments from the Seminoles under current terms of the tribe’s deal with the state and cannibalize the existing racino industry. The state’s chief economist predicts that the net impact of three $2 billion destination resort casinos would offset that loss through money from new construction, new tourists and as much as $455 million in new tax revenue over the next four years.

Against the backlash, the casino resort industry is pushing on all fronts. Genting, the Malaysian conglomerate that has spent nearly half a billion dollars on The Miami Herald’s bayfront property and surrounding real estate, has hired dozens of lobbyists and consultants, and spent an as-yet undisclosed amount on political contributions.

As Florida legislators move reticently forward on Genting’s bold plan to bring a $3.8-billion resort and convention center to Miami, Genting worked quietly with New York Gov. Andrew Cuomo to ink a deal to bring a massive convention center and casino to the company’s newly remodeled Aqueduct racetrack property in Queens. Cuomo announced in his state-of-the-state speech last Tuesday that his administration was working with the company to build the nation’s largest convention center near the JFK airport and that he would push for a state constitutional amendment to allow casino gambling.

But the crown jewel of the U.S. gaming market remains Miami because of its climate, beaches and tourist draw. Legislators have read the statewide polls that show support for three casino resorts is overwhelming in South Florida; less so in other parts of the state. Polls financed by Genting and the Las Vegas Sands show that voters in all parts of the state warm to the idea, however, once the proposal is described to them.

Fresen and Bogdanoff believe the legislative resistance is melting as a result.

“I don’t think there’s the repulsion there used to be in the House,’’ Bogdanoff said. “Everybody understands we have ignored this issue way too long.”

Some legislators predict their colleagues will do nothing more than close the gambling loopholes and crack down on the unregulated storefront casinos that have proliferated because of Florida’s vague sweepstakes law.

“It’s easier to say no than yes,’’ said Rep. Ron Saunders, D-Key West. He predicts the bill won’t pass this year, allowing legislators to continue to collect political contributions from the profitable industry.

“Do you really think they’ll let them walk away with a bill in their hands when they could keep them on the hook for another year? It’s a cynical view,” he said, “but it’s just the way it works.”