South Florida really should have seen this coming: a look back at how our housing bubble compared to the nation’s.

The Federal Housing Finance Agency maintains appreciation indices for metropolitan areas, which are similar to the famous Case-Shiller index but more local. By stacking up Broward and Miami-Dade’s indices to the nation’s, the warning signs are hard to miss. 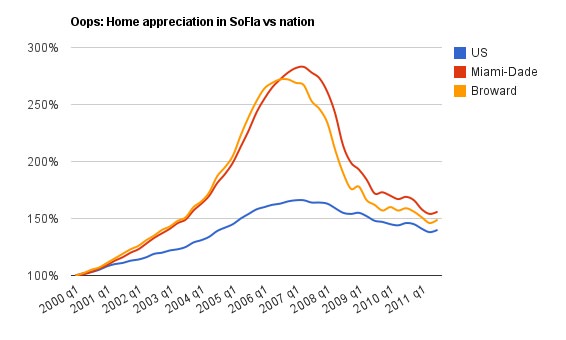 The chart anchors all three indices to the first quarter of 2000, so the numbers show appreciation since then. Real estate got out of hand across the country, with appreciation peaking nationally at 166 percent in 2007. But in Broward, values soared 272 percent. Miami-Dade did even better, up 283 percent.

It’s easy to see how quickly values collapsed, but the chart also points out something that tends to be overlooked amid the wreckage of real estate. Home values are still ahead of where they were in 2003.

A sign of resiliency, or a hint that South Florida still has some dropping to do? We’ll probably find out this year.

The ETM crunches 60 local indicators to measure the economic activity, then finds when each indicator was at that level before the 2007-2009 recession. At the moment, the current economy most resembles where it was in June 2002. Visit miamiherald.com/economic-time-machine for updates and analysis of the latest economic data.