A 6,755-square-foot apartment at Hong Kong’s luxurious 12-unit Opus has been sold for HK$430 million (U.S. $55 million). That is $8,130 per square foot. The price makes the apartment Asia’s most expensive flat on a per square foot basis, and the second-most costly in the world after London’s One Hyde Park, according to Eva Lee, head of Hong Kong and China property research at UBS. 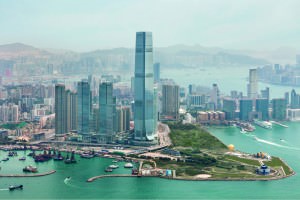 Li Xueying Asia News Network (MCT) reports Government data show the price index began climbing from the first quarter of 2009. It barreled past the previous 1997 peak, and every quarter since last year has registered new highs.

MCT notes one way of measuring affordability is the price-to-income ratio. Hong Kong weighs in at 18.6. This means a household has to save 18.6 years of its annual income without consumption to buy a standard flat.

MCT states analysts estimate Hong Kong apartment prices have to fall by 19 per cent to 30 per cent before the “sandwich class” earning between HK$20,000 and HK$30,000 can enter the market.

Among the 10 points in Chief Executive Leung Chun Ying’s recent proposal are that the government will speed up the approval process of presale consent for private flats; sell public flats meant for rental; and re- zone government institution or community (GIC) sites for homes.

MCT states Hong Kong analysts estimate about 150,000 housing units, private and public, will enter the market in the next five years.

But a closer look at the measures shows it is unlikely that all the promised 150,000 units will materialize, and even if they do, it will take awhile, MCT states.

One handicap the government has is an inability to control record-low interest rates, the news agency points out. The Hong Kong currency is pegged to the US dollar. That means rock-bottom interest rates set by the U.S. Federal Reserve are feeding the city’s housing boom as well, notes Dr. Edward Yiu of Hong Kong University.