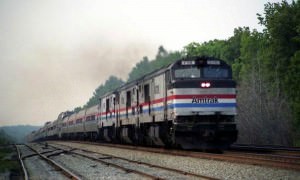 Miami officials are excited about what a 240-mile passenger rail to Orlando with a train station at the end of the line in the heart of Miami can do for that neighborhood, as well as the entire downtown. Coral Gables-based Florida East Coast Industries Inc. is proposing to build a station on a 9-acre site it owns along Northwest First Avenue, north of the Miami-Dade County Courthouse on the west side of downtown.

“It’s a huge economic stimulus any time you get a mass movement of people into an area,” says Miami City Commissioner Marc Sarnoff, whose district includes the proposed station site.

The station would be modeled after London’s Paddington railway station, as part of the company’s All Aboard Florida project to create a passenger rail system connecting Miami to Fort Lauderdale, West Palm Beach and Orlando.The line would start operating by the end of 2014, but the company so far has disclosed few details of the proposed station.

The station should be carefully planned so that it becomes a landmark, says Alan Ojeda, president and CEO of the Rilea Group, a real estate development firm based on Brickell Avenue and a Downtown Development Authority board member.”This is the starting point of things,” Mr. Ojeda says. “It has to be an important building.”

He says the station and passenger line could lay the foundation for farther-reaching and faster trains in the future linking Miami to cities such as Atlanta.”It’s the first big step,” he says.

The passenger rail would run alongside the freight line from Miami to Cocoa in Brevard County, and new passenger tracks would be laid from Cocoa to Orlando.

Company officials say the estimated $1 billion project would be the first private, unsubsidized passenger rail service built in generations between major US cities.

Although not considered a high-speed rail, trains could reach speeds near 125 mph along the less-populated areas of the route. In more densely settled South Florida, the trains could go no faster than 79 mph. The goal is to provide trips between Miami and Orlando in about three hours.

Amtrak, the federally-owned national rail corporation, currently offers twice-daily service between Orlando and the outskirts of Miami, but those trips take five hours or longer.

With All Aboard Florida, Miami officials have high hopes for what the influx of thousands, perhaps even millions of rail passengers each year into the center of the city can do for downtown, especially for what they describe as under-developed areas in the vicinity of the station site.

“It will be the catalyst for development of western downtown Miami,” says Miami attorney Neisen Kasdin, a Downtown Development Authority board member and former mayor of Miami Beach. “I think you’ll see larger-scale and smaller businesses open up.”
Mr. Kasdin says the passenger rail and station would be “a very exciting addition” to downtown, helping to transform the neighborhood to a more vibrant transportation hub.

“This could create a new focus for development,” he adds. “This is an important initiative for everyone to get behind.” It will not only create investment in that [immediate] area, but it will strengthen all of downtown as business and activity center.”Mr. Sarnoff, a lawyer, has broached the idea of moving the Third District Court of Appeal to the site to help create a “legal campus” there. The Court of Appeal is now located west of Miami near the Florida Turnpike in the Tamiami area.Mr. Sarnoff says he has discussed the idea with the court’s chief judge, who seemed intrigued. So far, nothing has been formally planned.

In addition to the county courthouse, state and federal courts sit near the downtown site. The only other thing needed there, Mr. Sarnoff says, is a law school to round out his idea for a legal campus, which would attract more law firms and restaurants and other businesses.”It would make for a legal community with live-work opportunities” in the neighborhood, he adds.

An intercity passenger rail downtown, Mr. Ojeda says, is long overdue.”This should have been done 50 years ago,” he says. “Every serious city in the world has it.”Mr. Ojeda foresees the passenger rail leading to greater development, such as retail and offices.”I think any method of transportation opens up places” for economic development.