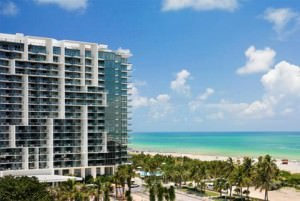 There’s been a major real estate boom in Miami Beach recently but what’s changing hands aren’t lofty penthouses on Collins Avenue but small to mid-size luxury hotels that are being bought, sold, managed and renovated. In just the last few months:

– We saw the arrival of the $85 million SLS South Beach Hotel on Collins Avenue
– The Royal Palm Hotel was sold for $130 million and is being rebranded as the James Hotel
– The Gansevoort hotel was sold and renamed The Perry and is being managed by Starwood
– Kimpton beat out Doubletree for the management of the Surfcomber Hotel which sits at a prime location at 17th and Collins Avenue
– The Delano hotel is for sale (although its owners still want to manage it after the sale)
– And David Edelstein, the developer and owner of the W South Beach, along with the SLS Group have reportedly just bought Collins Avenue neighbor the Raleigh hotel for $55 million

“The unprecedented sales, purchase and renovation upgrades of hotel properties all over Miami Beach are indicators of the strength and demand for the destination,” says Jeff Lehman, Chair, the Miami Beach Visitor and Convention Authority. “Miami Beach’s consistent placement in the top ten of varied Best Of lists, continued allure in a competitive vacation market, ongoing infrastructure updates, sophisticated cultural, gastronomic and social options and of course, our great weather entices business-savvy hotel operators who realize this city is the best place to invest in now and for the future.”

Renovation projects currently underway include the B Hotel (the former Continental) and the Saxony hotel which is getting a dramatic makeover courtesy of star architects, Rem Koolhaas and Lord Norman Foster, continuing the tradition of star architects bringing their talents to Miami Beach. The reconstruction of the historic beachfront Seville Hotel, is also underway, soon to be branded a Marriot Editions as envisioned by Ian Schrager, the celebrity hotelier who invigorated South Beach with his launch of the Delano hotel 15 years ago. A number of properties are also actively courting buyers – if the price is right.

Luxury properties have become particularly in demand on Miami Beach with hotels like the SLS South Beach (designed by celeb designer, Phillipe Starck), the Mondrian (designed by famed Dutch designer Marcel Wanders), the W, Standard and Setai opening their doors in recent years and other properties getting significant makeovers like the Betsy, Surfcomber (also managed by Kimpton hotels), Fontainebleau and coming up, the Loews. Major hoteliers see Miami Beach as a sure bet in a tough economy. “We encourage business growth and development on the Beach,” says Lehman, “but all the attributes of Miami Beach make it easy to see why everyone wants to be here.”

With an average year-round temperature of 75 degrees, Miami Beach has an unrivaled reputation for culinary offerings, nightlife, culture, fashion, and luxurious hotels. Also a popular destination among travelers, Miami Beach was recently ranked by Trip Advisor as number one on its Top Winter Sun Vacation Rental Getaway Destinations for 2011 list and was included on both the Top 25 Beaches in the World and Top 25 Destinations in the U.S. lists. Boasting seven miles of breathtaking beaches, Miami Beach is easily accessible from the Port of Miami and Miami International Airport. The City of Miami Beach has just been named one of the top cities worldwide for ‘walkability’ and is equally easy to navigate by bike or by boat. Home to unique museums, to the New World Symphony and Miami City Ballet, to over 17,000 luxury, boutique and resort hotel rooms, 12 public parks and to the Miami Beach Convention Center, Miami Beach is a destination for all seasons. Miami Beach is like no other place in the world!