According to a new Global Cities Report by London-based real estate consulting firm Knight Frank, fifteen of the 26 cities tracked by the Prime Global Cities Index (58%) recorded flat or positive price growth in the year to September, but over the last quarter 20 of the 26 cities (77%) have seen flat or positive growth – indicating an improving scenario.

The index now stands 18.7% above its financial crisis low in Q2 2009 with Hong Kong, London and Beijing having been the strongest performers over this period, recording price growth of 52.9%, 45.4% and 39.5% respectively.

Five cities recorded double-digit price growth in the year to September; Jakarta, Dubai, Miami, Nairobi and London – a city from each of the five key world regions.

The index rose by 1.1% in the three months to September, down from 1.4% last quarter
Prime prices across the 26 cities tracked by the index increased by 3% in the 12 months to September
Cities in Europe remain the weakest performers, recording a fall of 0.5% on average in the last 12 months
Jakarta (up 28.5%) was the strongest performer in the year to September
Economic uncertainty together with few strong-performing alternative asset classes is strengthening demand for luxury bricks and mortar

Although Asia heads the pack – Jakarta recorded 28.5% annual growth – the results this quarter suggest that demand for luxury homes is only loosely linked to the strength of regional economies (Asia Pacific has only two cities in the top ten compared to Europe’s three). Instead, the flow of international wealth and the attitudes of HNWIs are increasingly influential.

Cities such as Dubai, Miami, Nairobi and London are increasingly considered investment hubs for HNWIs in their wider regions. In the wake of the Arab Spring, Dubai has been seen as a relative safe haven for MENA buyers while Venezuelan and Brazilian investors have looked to Miami to limit their exposure to domestic political and economic volatility.

Not all prime residential markets are benefitting from the global economic uncertainty. In Paris, although prices held firm in the third quarter, sales activity was muted as buyers of all nationalities adopted a “wait and see” attitude. Vendors are unwilling to reduce prices until there is greater clarity from President Hollande and the Eurozone leaders in relation to the debt crisis.

Asia’s prime markets look to be entering a period of more moderate growth due in part to the regulatory measures aimed at cooling prices and improving domestic affordability.

James Price of Knight Frank’s International Residential Development team tells World Property Channel, “Aside from London, it would appear the other strong performers are either those established international markets that experienced a lull but are now ‘kicking on’ again (e.g. Miami, Dubai) or those that could be described as second tier international cities – strong established markets, but not global ‘gateway’ cities (e.g. Zurich, Vienna, San Francisco), where interest has driven price rises from a lower base.”

James continues, “While some of the more traditional prime second-home markets are recording negative movement, this should not disguise their long-term popularity and strength, instead it suggests a cooling from previous higher levels.”

Teresa King Kinney, CEO of the Miami Association of Realtors commented, “Miami is a truly global city that has experienced the positive impact of international buyers and investors unlike any other. Miami’s global appeal resulted in a rapid and strong recovery that yielded an all-time sales record in 2011 and extraordinary inventory absorption. Such demand has fueled more than 10 months of consecutive double-digit price appreciation in the Miami residential real estate market. More importantly, Miami’s position as a leading global market will continue to generate demand from both U.S. and foreign buyers long into the future, adding great value to our city, our market, and our properties.” 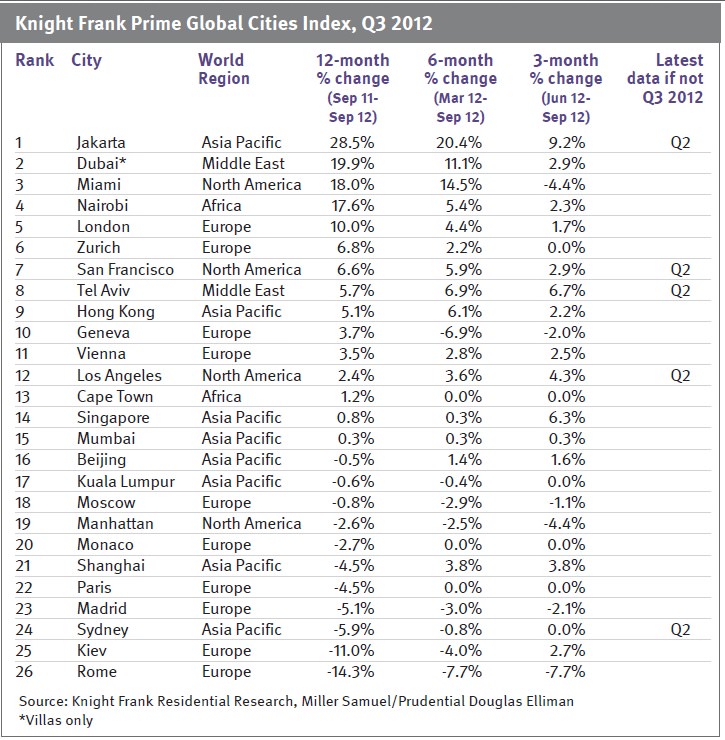 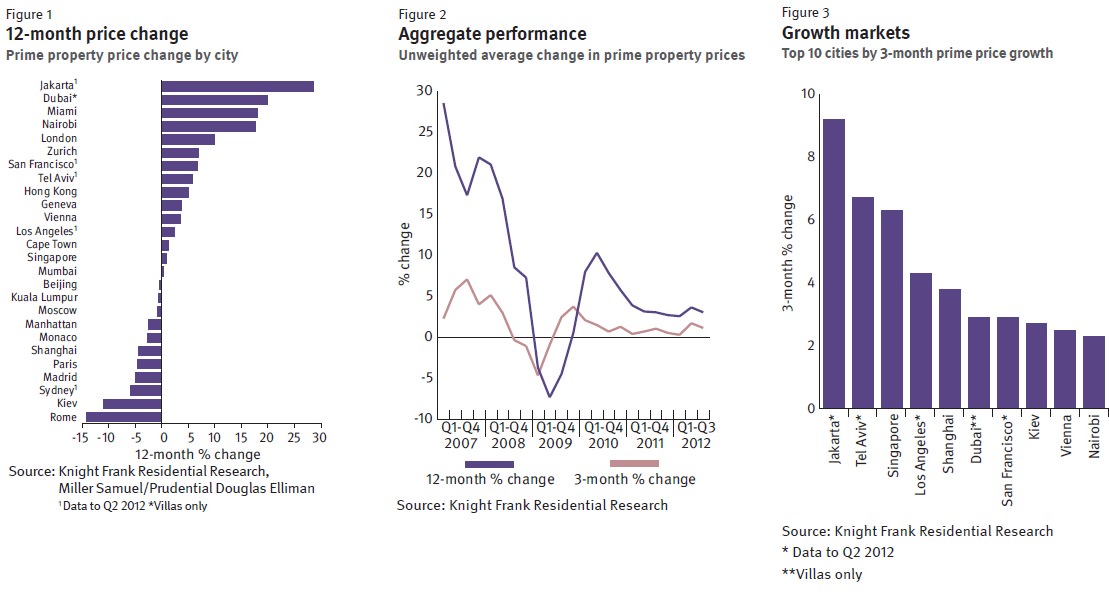