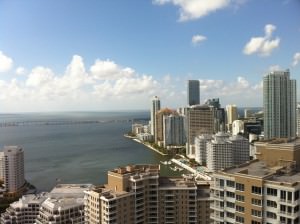 The tide is finally turning in the U.S. real estate market and the charge is being led by increased prices and sales in Miami. The city got a head start by drawing attention from foreign investors early on and the attention has not waned despite rising prices. The Miami Association of Realtors report that prices were up again in August, making it the ninth consecutive month of gains. A shortage of homes for sale is helping to drive prices up faster and higher than in other areas of the country, but it doesn’t seem to bother investors who are still finding deals on properties in the Floridian hotspot. For more on this continue reading the following article from Property Wire.

Miami, which is considered as leading the property revival in the US, saw home prices rise again in August, the latest figures from the Miami Association of Realtors show. It is the ninth consecutive month of appreciation with buyers from overseas in particular fueling the growth of the real estate market.

The median sales price of Miami-Dade condominiums increased 28.4% to $146,500 compared to a year earlier, with prices having now increased for each of the last 14 months. The median sales price of single family homes rose 10.8% to $195,000. Despite the shortage of housing inventory, Miami home sales remain strong and continue to drive significant price appreciation, according to Miami Association of Realtors chairman Martha Pomares.

There is evident demand for Miami properties, particularly from foreign buyers and investors who recognize Miami?s desirability and profitability. Miami remains the top market for foreign buyers in the nation, and local international activity continues to grow, she said.

‘Miami is experiencing a mini-boom fuelled mostly by demand from international buyers but also by population growth resulting from migration from other states, baby boomers, and local consumers,’ Patricia Delinois, residential president of the Miami Association of Realtors.

‘Miami’s firm position as a major global city is expected to continue to draw demand long into the future, as businesses, residents, visitors and tourists, investors, and vacation and second homebuyers take advantage of all that our vibrant and unique city has to offer,’ she added.

Over the last year, the inventory of residential listings in Miami-Dade County has dropped 26% from 15,405 to 11,431. Compared to the previous month, the total inventory of homes decreased 0.2%. The figures also show that currently there are 4.2 months of supply in Miami-Dade.

Strong demand for bank owned (REO) properties and improved processing of short sales continues to yield absorption of distressed listings and to contribute to price appreciation.

Nearly 90% of foreign buyers in Florida purchase properties all cash, reflecting the stronger presence of international buyers in the Miami real estate market.