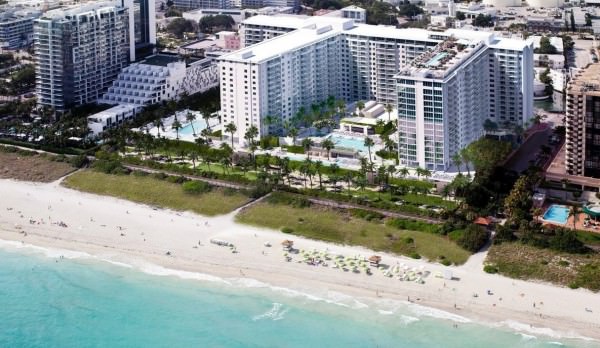 This exceptional Beachfront will feature 1,2,3 and 4 bedroom residences and duplexes located in the heart of vibrant South Beach. Featuring only 163 exclusive oceanfront residences.

Almost a year after buying the old Gansevoort South, the consortium that owns the property announced plans to make it part of the new 1 Hotels brand.

The Gansevoort-turned-Perry hotel in Miami Beach is set to open in its latest iteration early next year: the eco-minded 1 Hotel & Residences South Beach.

Owners of the massive property at 2399 Collins Ave. are investing more than $100 million in the project, a renovation that started after they bought it for nearly $230 million a year ago.

In addition to Starwood Capital, a private investment firm that is not affiliated with Starwood Hotels & Resorts, the ownership group includes the LeFrak Organization, a real estate development and management company, and investment manager Invesco. Entities controlled by Credit Suisse sold the property last year after the bank took it over in 2010.

Plans are for the 417 room hotel, called a “lifestyle eco-brand”in a press release, to reopen in early 2014. The property will also include 163 exclusive residences that are expected to range in price from $ 600,000 to more then $6 million when they start selling in April.

Once finished, the property will include four pools, a new restaurant, a private lobby and arrival area for residents, new balconies, new views of the ocean and a new boardwalk.

Renovations to the 1970s building — including replacing windows and the air-conditioning system — are being done with a goal of earning LEED certification, a process that hasn’t always been easy.

“It’s about as wonderfully complicated as we’d imagined,” said Sternlicht, former chairman and CEO of Starwood Hotels & Resorts and the founder of the W Hotels brand. He drew inspiration for the hotel brand’s name from the U2 song One and the idea that the environment is the shared responsibility of one world.

But he and other owners said that for all the emphasis on the environment and nature, the hotel will still be geared to a sophisticated luxury crowd.

“We’re not just making a place that’s fun for tree-huggers,” said Richard LeFrak, chairman, president and CEO of the LeFrak Organization, another owner. “It’s still South Beach and it’s still supposed to be fun — and this place will be a lot of fun.”

Although this 1 Hotel has not been released to the public yet, please fill in the form below to be added to our VIP list.

All inquiries will be held in strict confidence

Under the name Perry, the hotel was doing “pretty nicely, shockingly, for an independent hotel,” Sternlicht said; a search for rooms this weekend turns up rates starting at $599 a night. He expects the relaunched 1 Hotel to command higher rates as it competes with properties as diverse as the Loews and ultra-luxury Setai.

The 1 Hotel and Home Residences South Beach, is a more-than-$100 million project to renovate a structure from the 1970s as a LEED-certified building with a “firm ecoconscience” in terms of design and operation. While retaining 95 percent of the existing structure, the building will use 35 percent less water and be 15 percent more efficient than required by code, according to Kemper Hyers, head of design for Starwood Capital Group.

But “it’s not just about meters,” says Hyers, who emphasizes the “nature-influenced” vision for 1 Hotel & Residences South Beach’s interior design. “That’s not an emotional hook to a guest staying in a hotel. You want the visuals; you want to feel it. I always say that if farm-to-table were a hotel, this would be the hotel.”
Here again, the impetus for Starwood’s line of 1 Hotels, for all of their low-flow toilets and LED lighting, has much to do with money. Several years ago, Starwood Capital Group CEO and Chairman Barry Sternlicht “saw nobody doing [green design] in hotels,” Hyers says, “and so he wanted [1 Hotels] to be the absolute first green hotel product.” Now, according to Hyers, Starwood’s guests, especially those coming from countries where green buildings are prevalent, expect a high level of eco awareness from upscale hotels.

With the growing number of such structures around town—Ferré counts 77 completed LEED projects in Miami-Dade County—Miami still has a long way to go before catching up to the Portlands and Amsterdams of the world. But if the green flush of envy isn’t incentive enough, then the allure of green dollars should motivate Miami to continue evolving into a 21st-century city. This is especially important, says Ferré, for a place whose economic well-being is so strongly tied to its natural habitat. “We need to reinvest in building in a certain way that preserves the whole purpose of why people come here—which is for the clean beaches and clean environment.”