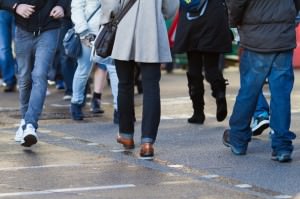 Instinct probably tells you that you’ll pay a lot more to live in a downtown apartment, above a grocery store, next to a bar strip and within walking distance of your work place than you will to settle into a comparable home in a bedroom community outside of the city. As this model of compact urban living grows more popular – and every new housing projection reaffirms that it is – walkable places are also growing more expensive.

Just how much more expensive, though, may shock you. New research from the Brookings Institution has created a five-tiered scale of walkability for metropolitan neighborhoods, from completely non-walkable places (exurban residential communities where everyone gets around by car) to mixed-use, dense and amenity-rich neighborhoods where you may not need a car at all (think, in the Washington, D.C., region, Dupont Circle and Georgetown).

Brookings researchers Christopher Leinberger and Mariela Alfonzo wanted to put hard numbers to the difference between these places. Looking at the Washington, D.C., region, they’ve calculated that moving from a Level 1 to a Level 2 walkable neighborhood (from a non-walkable place to a slightly less non-walkable one), you will wind up paying $301.76 a month more in rent for a similar home. If you’re really moving up in the world – from, say, that car-dependent exurb to a Georgetown flat – that means the premium to live in a walkable urban community may run you as much as $1,200 a month.*

“It is mindboggling,” Leinberger says. “These were much more dramatic results than I would have guessed going into this. It also shows our lack of understanding and why it’s important to measure this phenomenon, because we need to better understand how do we create Dupont Circles, and also how do we mitigate the downside?”

On the other side of the equation, all of this means that truly walkable urban communities are much more economically vibrant than their drivable suburban neighbors. For each step up this walkablity ladder (which was constructed using the Irvine Minnesota Inventory of urban design dimensions linked to walkability), a store is likely to boost its retail sales by 80 percent, in part thanks to all this sidewalk traffic.* The value of your home is likely to go up by $81.54 per square foot. Average rent per square foot of office space, meanwhile, goes up $8.88. (These are all, by the way, correlations, not causal explanations, although Leinberger expects that urban researchers will prove that link eventually.)

If you own that office space, or a home, or a retail shop in one of these walkable neighborhoods, all of this is great news.

“I am both the bearer of good news and the bearer of bad news,” Leinberger concedes. These neighborhoods are the economic drivers of their cities, often accounting for a disproportionate share of public revenue relative to their land mass. But today, only the wealthiest among us can afford to live in them. That will remain the case until we create many more Dupont Circles – enough to finally bring the supply of walkable urban neighborhoods in line with the demand of all the people who want to live in them.

These numbers all speak to a fundamental change in demand in our cities.

“It wasn’t that many years ago that walkable urban places had a price penalty associated with them, not a price premium,” Leinberger says. “That’s the structural shift. And when you have a structural shift, it’s important to change your public policy to take it into consideration.”

Those “walkable urban places” he’s talking about did not necessarily have people walking around in them 20 years ago (“Maybe they were running around because they were fearful of being mugged,” Leinberger says). These were the inner-city neighborhoods that middle-class city-dwellers abandoned decades ago. Over time, they deteriorated. They became the cheap places to live. And now that trend is reversing.

Today, amid all this talk about walkability, Leinberger and Alfonzo wanted to bring an almost scientific precision to one of the core beliefs of urbanism: the idea that cities will be stronger going into the future if they eschew “drivable suburban” for “walkable urban” development.

“We urbanists have lots of opinions, but nothing that would be provable principles,” Leinberger says. He quotes the physicist Geoffrey West, who once observed that urbanists have none of the kind of underlying principles that can be tested and proven like scientists do. “He had a line that was a real slap in the face, which was that urbanists are where physicists were before Kepler.”

(Johannes Kepler is the guy who figured out in the 17th century the laws of planetary motion.)

“So this is one attempt,” Leinberger says, “to bring that level of rigor to our field.”

He is also hoping that urban planners and business leaders will bring this hard data to their arguments with skeptics of walkability – and why we need much more of it.

* An earlier version of this article misstated the financial premium of living in a walkable community. Additionally, it misstated how the researchers developed their walkability ladder.