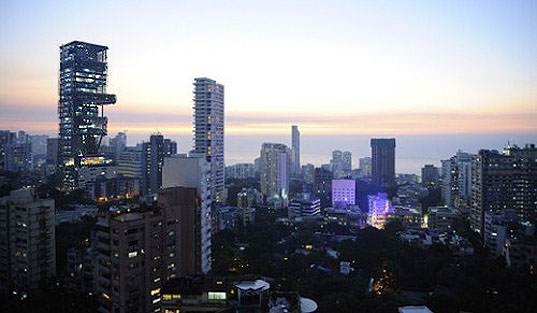 World’s Largest and Most Expensive Family Home Completed. The “Greenest of All Buildings” was recently completed in Mumbai, India and we couldn’t be more appalled. The Antilia house which unveiled its first renderings just over two-years ago has become a frightening reality, egregiously boasting 27 stories at 568 feet high, with a total area of over 398,000 square feet of living space. What at first glimpse looks and sounds like a typical skyscraper is far from it – the Antilla is in fact a $1 billion family home built for India’s richest man (and Forbes’ fourth richest man) Mukesh Ambani, his wife, and three children. Constructed within a country estimated to have one-third of the world’s poorest population, the Antilia truly exemplifies the disease of excessive consumption, extreme wastefulness, and unsustainable living that is permeating today’s society.

The Antilia is the product of a partnership between architecture firms Perkins+Will and Hirsch Bedner Associates. The building, which has taken nearly three years to complete, hosts 27-stories, which are far from modest. The tower would in fact hold 60-stories, had Ambani settled for standard-height ceilings, rather than opting for an exceptionally high floor-to-ceiling program. The building currently stands on Mumbai’s Altamount Road – prime real estate in the dense metropolis – towering over surrounding structures less than half its size. 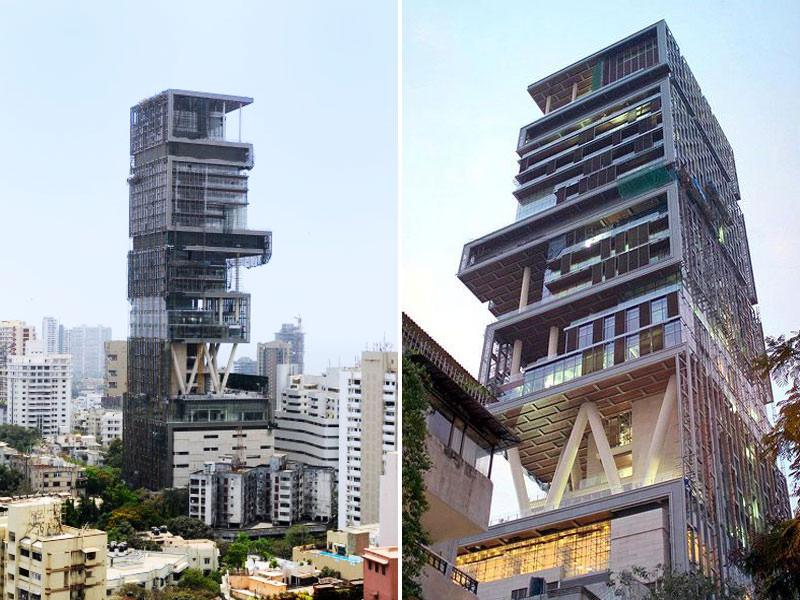 The home contains a health club with a gym and dance studio, a swimming pool, a ballroom, guestrooms, a variety of lounges, and a 50-seater cinema. Three helicopter pads have been installed on the roof, and a car park for 160 vehicles sits on the ground floor. Clearly more space than a housekeeper, or full hotel staff can handle, the Ambani family has employed a staff of 600 to tend to the home!

While the Antilia initially marketed itself as one of the greenest buildings to in the world, not surprisingly, the singular green element first portrayed in the initial renderings is far from evident. The image once depicting a structure covered in green foliage, has in fact been replaced by a vision of stark steel geometry stacked up towards the sky. Experts are saying that no other private property of comparable size and prominence exists anywhere in the world. We say: GREEN FAIL.