Zaha Hadid Is Designing A Skyscraper In Downtown Miami 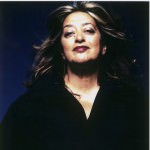 According to Curbed Maimi, Zaha Hadid, the internationally acclaimed Pritzker Prize winning star architect, and one of the most revered architects of our time, is designing a condo tower at 1000 Biscayne Boulevard, her first skyscraper in the western hemisphere.

Curbed Miami has learned via email from Gregg Covin, one of the developers of the project, the other is Louis Birdman. The building will fill a gap in the section of the “Biscayne Wall” of condo towers across from Museum Park in Downtown Miami. The site is currently occupied by a BP Station, which Curbed Miami had theorized months ago might soon be built upon. The tower’s designs will be unveiled early next year and will be the “most iconic tower ever to be built in Miami.”